A downloadable game for Windows

Territorial.io is a multiplayer territory conquering strategy game where you can choose to be a nation of any name and place. Your mission is to collect enough Balance to expand your territory by simply annexing empty land, battling other nations, and setting sail to new islands and continents.

When you first launch the game, you will be presented with 2 different game modes, that is Multiplayer where you can battle other players, and Single Player where you can fight bots while customing the difficulty. Of course, you should start playing in Single Player mode if you have just started the game to familiarize yourself with the mechanic and systems. Start with the Easy difficulty, and then slowly increase it to Hard.

2. Choose what map you are good at

Territorial.io comes in with multiple kinds of maps to choose from with each of them having different conditions and terrain. If you don’t really like doing naval attacks, then you can choose maps where there’s only land such as the White Arena and The Black Arena.

After you have trained yourself in Single Player mode, you may be ready to fight against other players. But of course, if you are still not confident and want to have a handicap, then you can choose Team Multiplayer where you will be placed in a random color team.

You will team up with people of the same color as you to battle other colors. It is way easier than single multiplayer since you can export to other team members and gain backup from them.

At the start of a battle, the game will let you choose where you want your starting position to be. One strategy is that you can pick an area near a vast ocean since it is quite a great natural barrier to protect yourself from the first few minutes of the battle.

5. Focus on a large body of land

There are two ways you can attack and expand. That is through land and by set sailing through the sea. Since land expansion travels way faster than the sea (since your army will need to travel the water first), you should first focus on expanding your territory in a big land area.

That’s why we recommend you to first pick your starting position in a big continent rather than small islands since the first few seconds of the game are the most crucial as you race others in capturing empty lands. Bigger land also means bigger Balance, therefore you should first focus on them and create a good size of territory for your nation.

6. Peace and Patience is the key to success

Of course, when your territory becomes big and wide, other players will come to notice and might consider attacking you. This is where good diplomacy comes in. The game presents you with a feature of Peace where you can create agreements with other nations to form a temporary truce.

But players will not accept your offer if it looks like they may have a chance to just completely defeat you and take your land. So makes sure to not spend too much of your army and balance in one move.

However, don’t wait for too long, or else the Interest will become too high and start to chip away at your balance. Since you will also be charged a little fee when attacking, we recommend you to attack at least 20% of the total balance every time at the start of the game. Once you have become stronger and have a bigger army, you can decide for yourself based on the condition to attack what percentage from the total balance you have.

7. Focus on the Real Players first

Real players are of course way harder to deal with since they may not accept a peace offer and just straight up obliterate you. Therefore you might think going after the bots first will be a great idea, but you can also think of the opposite.

One strategy is to focus on surrounding real players first, since letting them get bigger at the first few minutes of the game can propose danger to your own territory. Focus on eliminating the closest of the first, and then shift to the bots.

7. Join in on the attacks

When playing on a map with other players, you will soon come in contact with those who are attacking your other neighbor. You want to seize the opportunity by attacking whoever is looking like they might lose. Don’t forget to ask for a Peace agreement after so that you won’t be their next target.

You may think emotes are not that important when it comes to playing Territorial.io, but it is a good media to use as diplomacy with other players. You can have an increase in their trust if you know how to communicate well. And by using emotes, you can gain perhaps a little of their trust and therefore they will accept a peace offer from you.

10. Scatter yourself through many small islands

Another way to ensure some kind of victory, you can of course set sail to the many tiny islands on the map. This way, other players might not notice your presence and might just allow you to come in second with being completely wiped out. Though this strategy will only work if you have a good diplomacy strategy and also depends on the other player.

Sorry, For That, I would look and try to improve

The 32 bit support had been added

Our 32x Machine Passed This Test:

Sorry For That, but the game doesn't CPU's Below 2Ghz, but you can play it online at territorial.io 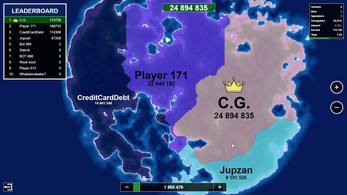